What is the difference between capacitor and condenser? 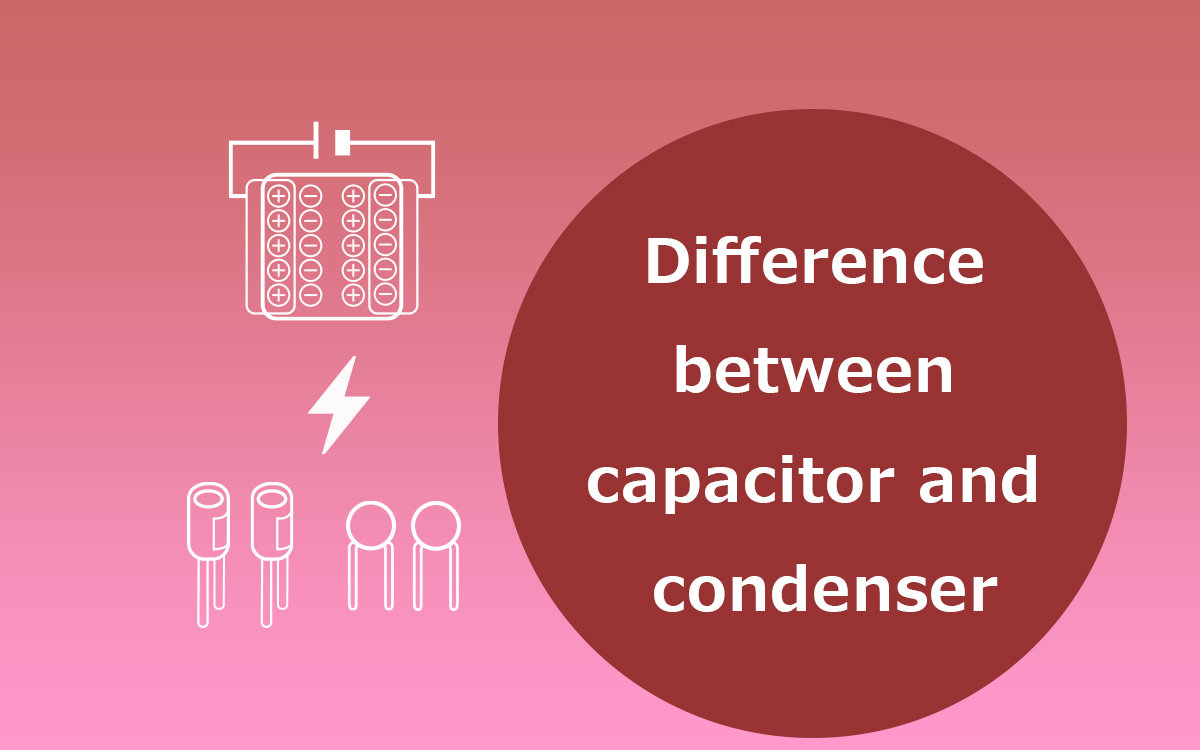 The terms "capacitor" and "condenser" are often used for the types of batteries and power storage devices, but many people may not understand the contents or differences.

This time, we will explain the difference between capacitors and condensers, their original meaning and their types.

Difference between capacitors and condensers

In English, “capacitor” is used for both capacitor and condenser and they were originally used with the same meaning.

A "condensers" often refers to a small electronic component that stores and discharges electricity, which is often used in electronic circuits and power supply circuits, even if it has the same function as a capacitor. Especially when it is used in an electronic circuit, the capacitance to be stored. Is very small and may use units such as μF (microfarad), pF (picofarad), etc. (see this blog post for units used in capacitors, etc.).

What is a capacitor?

So what is a capacitor in the first place?

When you think of a power storage device, you may think of batteries such as so-called alkaline batteries and lithium-ion batteries, but there is one big difference between the two.

It is whether a chemical reaction occurs when storing electricity.

Difference between battery and capacitor

In a battery, when electricity is stored or released, a chemical reaction occurs and the original substance changes to another substance.

On the other hand, in a capacitor, electricity is stored on the surface of the electrode by the force of static electricity, and no chemical reaction is used, so there is no change in the substance.

Since electricity is stored and discharged only on the surface of the electrode, the amount of electricity that can be stored is limited compared to batteries. However, it has the advantage of being resistant to deterioration.

Capacitors and batteries are used properly in fields where these features can be utilized.

There are several types of capacitors.

Here, we will explain for large-capacity capacitors, which are explained in the above section in terms of differences from condensers.

The method of classifying capacitors differs depending on the purpose, but an example is shown below. Capacitors can be broadly divided into symmetric and asymmetric types.

A typical symmetric capacitor is an electric double layer capacitor (EDLC), which uses activated carbon for both the positive and negative electrodes. It was commercialized in the later half of the 1970s and has a long history, and it is a capacitor that is widely used globally due to its ease of use, such as being completely discharged and usable.

Various types of asymmetric capacitors have been proposed for the purpose of improving the capacitance of EDLC, such as by using activated carbon for one electrode and using a chemical reaction for the other electrode. Many of them cannot be completely discharged, so they are distinguished from symmetric capacitors by the United Nations transportation regulations due to differences in handling.

A typical asymmetric capacitor is a lithium ion capacitor (LIC).

This is a hybrid type capacitor that uses EDLC for the positive electrode reaction and the lithium ion battery (LIB) reaction for the negative electrode reaction. This makes it a device that combines the features of EDLC with high-speed charge/discharge, long-term reliability, and safety; and the features of lithium-ion batteries, like high capacity, and it’s expected to be widely used in the future.

* The photo is a cell-type power storage device that we handle.

Summary of differences between capacitors and condensers

How was that? In this article, we have introduced the differences between capacitors and condensers, especially the types of large-capacity capacitors.

We are developing and manufacturing the lithium-ion capacitors introduced in this article. If you are interested, please refer to it.

* Please understand that the description in this blog includes interpretations based on the author's experience and subjective opinions. In addition, the technical information contained in this blog does not grant any guarantee or license to the intellectual property rights or other rights of the Company or a third party.