F (farad), Ah (amp-hour), Wh (watt-hour), etc. are often used as units that express the characteristics of capacitors, but many people may not understand the contents. This time, I will explain the meaning of these units and their relationships.

If you have a capacitor, you will definitely see the indications such as F and μF.

This is called capacitance, which is a quantity that expresses how much charge can be stored in the capacitor. Even with the same power storage device, many people may be confused because it is a unit that cannot be seen with batteries. In fact, the essential difference between capacitors and batteries is hidden here.

C at this time is called capacitance, and corresponds to the slope when the relationship between the amount of electricity and voltage is represented by a graph. 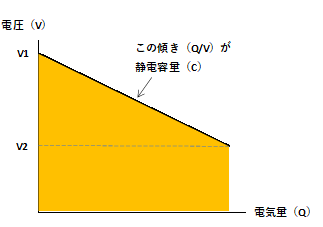 Relationship between F, Ah and Wh

Have you noticed anything by looking at this formula and graph? that's right. The amount of energy is nothing but the area of ​​a trapezoid surrounded by the amount of voltage and electricity.

When I saw the units such as F, Ah, and Wh of the capacitor, I wanted to be able to imagine this trapezoid in my head. It will be a powerful tool to help you understand capacitors, such as the difference between capacity (electricity) and capacitance: capacity, which are often confused, and the amount of energy that works with the square of the voltage.

A lithium ion capacitor (LIC) uses a carbon-based material that can store lithium ions as a negative electrode material while using the principle of a general electric double layer capacitor (EDLC) (see this blog for EDLC). It is a capacitor with improved energy density by adding lithium ions to it. 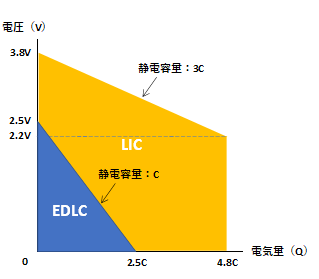 In other words, it can be seen that the lithium ion capacitor has 14.4 / 3.1 = 4.6 times more energy than the electric double layer capacitor (EDLC) of the same size.

This time, we introduced the units related to capacitors.

We are developing and manufacturing the lithium-ion capacitors introduced today. If you are interested, please refer to it.

* Please understand that the description in this blog includes interpretations based on the author's experience and subjective opinions. In addition, the technical information contained in this blog does not grant any guarantee or license to the intellectual property rights or other rights of the Company or a third party.